First of all, a crossbow’s range depends on a few factors and we’ll get to them later. But the answer to this question is 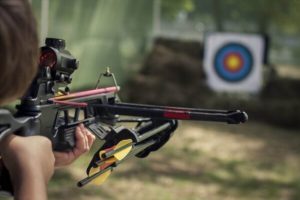 that most of the powerful crossbows can shoot up to 500 yards or 457 meters. This does not mean that you’ll be able to hunt or even hit a target that far out, this is just how far an arrow can travel when shot from an advanced crossbow.

This will depend on multiple factors which are:


It is basic physics that if you want to shoot farther out, you will have to get something that will make the arrow travel faster. A modern 300+ FPS crossbow will be able to shoot over 500 yards or 457 meters. You can check out our modern crossbow recommendations here.

The weight of the arrow or broadhead seriously affects a crossbow’s range. When shooting a crossbow, you want to choose a light arrow if you want more speed and distance. A heavier arrow’s downward trajectory starts affecting the shot at around 22 yards, while a lighter arrow can maintain its straight trajectory for about 30 yards.

A shooter’s skill will determine the accuracy and also how far a crossbow can shoot. Expert crossbow shooters are able to accurately hit a target at a distance of 100+ yards, depending on what the target is. Shooters have got to factor in a lot of things when taking a shot from a long distance like the downward trajectory, the wind drift, and any obstacles in the way.

What are you shooting for?

If it is target practice that you are shooting the crossbow for, then experienced shooters can hit a target from 100 yards away with a modern crossbow. The effective range of a 300+ FPS crossbow for target practice, however, is around 175 yards, where you’ll be able to penetrate a standard target (if you are able to hit it from that far out)

For hunting purposes, it is better and ethical not to shoot from more than 50 yards. The reason is that most people are not able to precisely hit the target (in this case, a live one) from a distance beyond the average 50 yards or 46 meters.

What if the deer moves and the arrow miss the vital organ and injure the deer instead?

The sound of firing the arrow will travel faster than the arrow itself and alert the deer. If it “jumps the rope” and the arrow hits it somewhere else, the deer will be injured. Any ethical shooter will not want to do that.

If you are just shooting a crossbow to see how far it can shoot, then shoot the arrow up in the air and it will go the farthest. Check out some of the fastest crossbows on the market.

A good crossbow scope will be a positive factor in how far you can shoot with a crossbow accurately, this is something that most shooters overlook. A standard 3-reticle scope can help you shoot accurately up to 40 yards. You can check out some great crossbow scopes here.

Do check out our crossbow recommendations for women!